Bluehost.com made me feel blue…

Two years ago I decided to get a personal site. I was after two things: flexibility and low cost. I didn’t want to get a VPS but I also didn’t want the hosting packages of one domain and 350MB of space. So I found IPage.com a shared hosting provider that was giving me unlimited hosted sites, unlimited databases, unlimited bandwidth and unlimited disk space for about 35 euros for a year… that in my book was a great deal! So I went ahead and bought it. In that year I was generally happy with them. My pages where occasionally a bit slow but still fast enough for my sites’ needs. The problem was that the 35 euro price was an introductory price and the next year IPage asked me for triple that amount… Since I didn’t feel like that was a good thing (now that you are a customer we’ll suck you dry) I decided to look elsewhere. A colleague at work recommended Bluehost.com. Bluehost offered me the same things as IPage plus SSH access for about 50 euros per year. I went for that and I was quite happy…. until this week…

On Wednesday night I suddenly received an email that my Bluehost account was deactivated due to “performance problems”. I went to my site and indeed it was down. So that was really a “shoot first, ask questions later” move from Bluehost. I started an online chat session with them where they were telling me that my sites cause performance problems to the Bluehost servers. The first tech support didn’t really know what he was talking about so for about 10′ I was on a wild goose-chase for problems. Finally I thought I knew what had happened. One of my pages performed some logging when it was visited. That file was becoming a bit big, so I thought that, that was the problem. I cleaned up my logs, told them I fixed it and asked them to reactive my account. The guy said sure and he re-enabled it.

Ten minutes later I get another email saying that my account was disabled again. After chatting online and getting nowhere, I decided to call them on the phone (international call to the US from Belgium). Eventually I discovered that the aforementioned logging site became so popular that it was bringing “too much” traffic to their servers (you remember the “unlimited bandwidth” feature, right?). I promised the guy to change the DNS records of that domain to localhost so that traffic would stop reaching their servers. He said “ok” and that I should call them in a few hours to get things re-enabled. While waiting for these two hours to pass, I received another email from my dear friends at Bluehost telling me that they decided not to reactivate my account. I quickly called them and explained that I had already fixed the issue. Their response was that the administrators at Bluehost had reviewed my site and had decided not to re-enable. That was that… no matter how hard I tried, I couldn’t convince them otherwise. To add insult to injury they refused to give me a small migration period, to allow me to take one or two days to find a replacement and then move everything, without all my websites experiencing downtime. 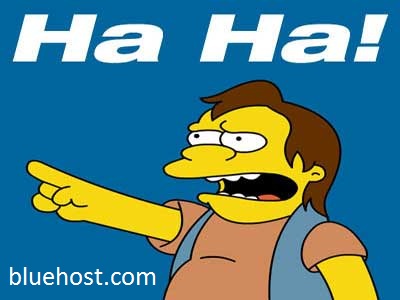 And that was it… I was left high and dry with about 8 sites offline (my personal site, my experiments, my blog and professional sites of friends and family) at 2:30 in the morning. That’s who Bluehost.com are… people who don’t care about you because you are a single guy in a sea of customers. One less fish is not really an issue for them. That’s why I write this post. I promised their representative on the phone that I would do all in my power to let the world know about their shenanigans.

That’s me keeping my promise. My advice to you… don’t choose Bluehost. They are very nice as long as you are within what they consider “normal”. Even if I did do something wrong (which I didn’t), there should still be room for discussion and reconciliation.  I am currently on Fatcow.com . It feels a bit like IPage but it was the best thing I could find in such a short notice. Lets see how they turn out.

19 Responses to Bluehost.com made me feel blue…